We all projected onto our toys as a kid. We lived in the Dream House with Barbie, saw front-line action with G.I. Joe, and countless other mundane and unrealistic fantasies. But what if your toys were literally you?

Founded in May of 2014 by Byran Ghingold and his girlfriend Ellie Czelandnicki in the East End, Go Figure! Custom Figures is dedicated to bringing its clients to small-scale (still) life. Each figure includes an accessory and a display base, and is shipped out in a “re-sealable blister bubble for non-destructive figure removal” (in other words, plastic to keep the figure and the box intact). Figures are either 3.75”, 12”, or 4” wedding cake toppers, with each size having four levels of included bonuses.

Each order is made using a process that includes custom sewing and sculpting and promises to be one-of-a-kind and an accurate replica of their subject. And it’s not just you and your friends- to a certain point, Go Figure! can recreate original characters (however, custom head and hair molds are not currently available, meaning some limited options in those areas).

Ghingold assures that their figures, while primarily made for a more mature 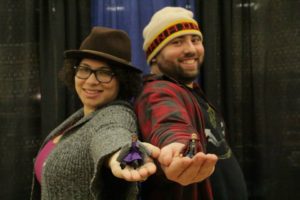 audience, can be handled and even played with (although not by anyone under the age of four). It was very important in the creation of Go Figure!, which began as a small project to create a thank you gift for Ghingold’s moving company, Steel City Movers. After Czelandnicki noted how popular they were with the employees and the public, the two started making it its own business.

While still a two-person company (aside from their vendors), Ghingold hopes to one day open a second, larger location in Pittsburgh that will employ “local sculptors, painters, and graphic designers to work on orders from a central location.” As of now, Go Figure! is exclusively online, with booths appearing at various events and conventions. 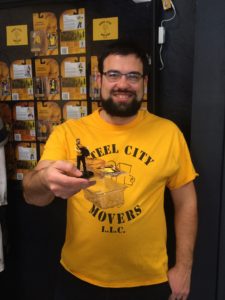 While still fairly new, Ghingold is no stranger to odd requests. “We had a relative tell us that we should get into the 1:1 scale doll market, so people could order life-size doppelgangers of real people…  but yeah, that would be too much liability to shake a stick at.” He also said that various bands have asked for bulk figures of each member, as they don’t seem to realize it’s a small-scale, limited quantity operation.

For now, the pair are happy to revel in their (excuse the pun) smaller victories. As of late March, Go Figure! Action Figures is a registered trademark, and they couldn’t be more ecstatic. But don’t think they aren’t taking things seriously- as their motto says, “we don’t play- that’s your job!”

Go Figure! ships internationally and within 6-10 weeks of ordering. Their website, with ordering and contact information, can be viewed here.

This site uses Akismet to reduce spam. Learn how your comment data is processed.